A glorious sunny day with clear blue skies and temperature already at 25c greeted both sides for the 2021 Final which was kindly sponsored by Fujitsu. Kent who last reached the Final in 1976 would be playing against a newly formed Alliance Team consisting of players from the Forces of Cheshire, GMP, Lancashire and Merseyside. The day was also the inaugural TeamPolice Event with 100+ Sponsors (current and potential) attending along with guests, Committee and players from the BPCC Squads.

Both teams had been relocated to the Indoor School at the Bennett End of the ground due to the dressing rooms balcony having failed a recent safety check so were out of order. The teams were now adjacent to the Hospitality Marquee where all Sponsors and guests were located. This would provide welcome relief as the temperature hit 30c during the afternoon.

On a dry flat looking pitch Kent won the toss and had no hesitation in electing to bat first. The loss of Cook in the 4th over brought in Roffey who joined Drakeley in a partnership of 80 in just 14 overs as both looked very comfortable and clearly set on a total in excess of 240. However Drakeley was bowled by Barker for 57 (11 x 4) and 2 overs later Roffey fell to Alam for 41. For the next 25 overs Kent struggled against some tight bowling from the Alliance especially by Dowling who, having taken the 1st wicket in his opening spell, returned to rip out the middle order with 5 – 1 – 8 – 3. Wickets continued to fall as the innings stuttered along eventually closing on 171 all out in the 45th over. It could have been considerably worse had it not been for the 25 wides conceded by NWA. Bowling highlights:

The general consensus was this total was a good 40 – 50 runs light and it would take a momentous bowling effort if Kent were to win. In the sweltering heat Kent had the opportunity of an early wicket but the catch was dropped at mid off and in the ensuing chaos also missed a run out chance. That said Hambleton did have Barber lbw for 2 in the 7th over with the total on 8. This brought in Gary Knight (GMP) who had the following scores leading up to the Final:

He’d also scored a century during BPCC week v National Asian Cricket Council. After a tentative start Wright began to find the boundary taking the score to 51 in the 15th over before being bowled by Drakeley for 35. At the half way point NWA had reached 96 – 3 with Knight still at the crease. The 2nd half of the innings saw Kent fight back with wickets falling at regular intervals however Knight was now holding the innings together well into his stride with well deserved 50. With less than 10 required Kent room 3 quick wickets as as Roffey picked up 2 in 2 as the score reached 168 – 7 in 37th over. Veteran Robin Fisher (Cheshire) strode to wicket to join Knight. A couple of balls later Fisher played what one umpires described as “shot of the day” as he drove the ball through the covers for 4 taking NWA to victory by 3 wickets. Gary Knight finished on 68* (7 x 4 / 2 x 6).

Kent had battled hard to make this a competitive match and had they scored another 30 – 40 runs this outcome may have been different.

Player of the Match (selected by the Umpires) went to Ben Dowling for his 4 – 25 which prevented Kent from getting a larger total having been in a really strong position. For the first time in the Competition this Award was sponsored by Woodstock Cricket courtesy of MD Johnno Gordon. Ben will receive a full kit package for the 2022 season.

Following the match the evening dinner took place with approximately 130 guest in attendance during which some further presentation & awards took place.

A special presentation was then made by Simon Cole (Chair) to Peter Mitchell who was officially standing down from the Committee and retiring from the score box. Peter started umpiring for BPCC in 1989 making 44 appearances before retiring from the Police in 1999. He returned to take up the scoring position in 2006 chalking up another 49 appearances. On behalf of BPCC I would like to thank him for his contributions to the cricket section especially as he was responsible for “signing up” the Sec to Notts Police back in Jan 1989. Enjoy your retirement Peter….you deserve it!!

The whole day could not have been better. 2 competitive Teams battling hard to win but playing the match in a spirit that was a credit to Police Cricket, in front of the largest audience for many years, who were not only entertained but provided with a fantastic hospitality setting to have networking opportunities with several Chief Constables and Snr key decision makers in a very relaxed and conducive atmosphere.

Many thanks to Leicestershire CCC (John Stew, Zoe Draycott and Lindsay Jeffcote) for once again allowing the Final to be held at their ground and looking after everyone throughout the day. Also a big thank you to our headline sponsor Fujitsu for enabling us to hold the event.  Thanks to CEO Sean Price for joining us in the evening and “singing for his supper” and finally, thank you to “Simo” and “Beef” for taking care of all the logistics and planning of a truly wonderful day which has received very positive feedback from those who attended.

Cricket has once again lead the way for Police Sport and set the “bar” for other sections to reach. Without doubt this is now a “Blue Ribbon” Event. 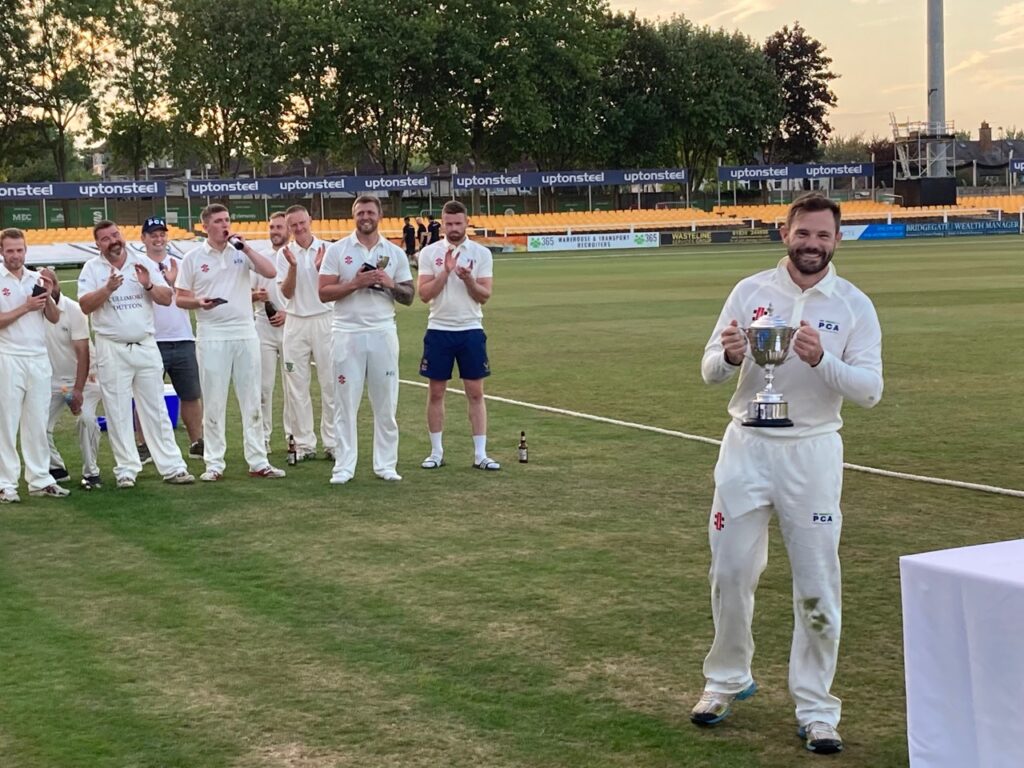 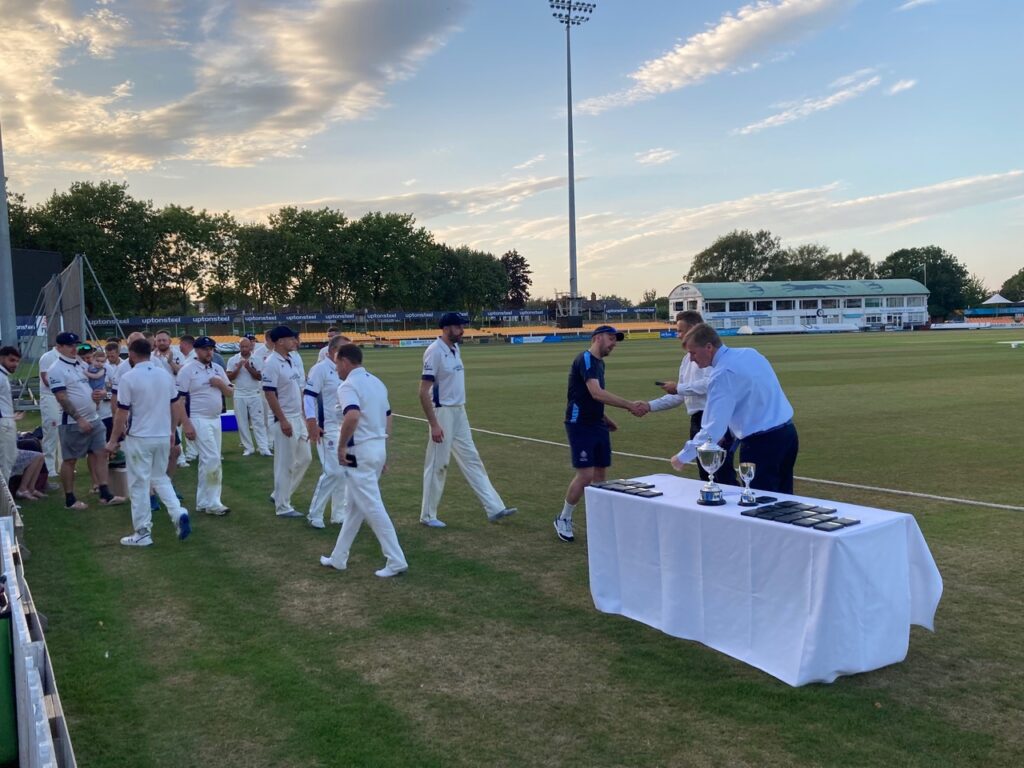 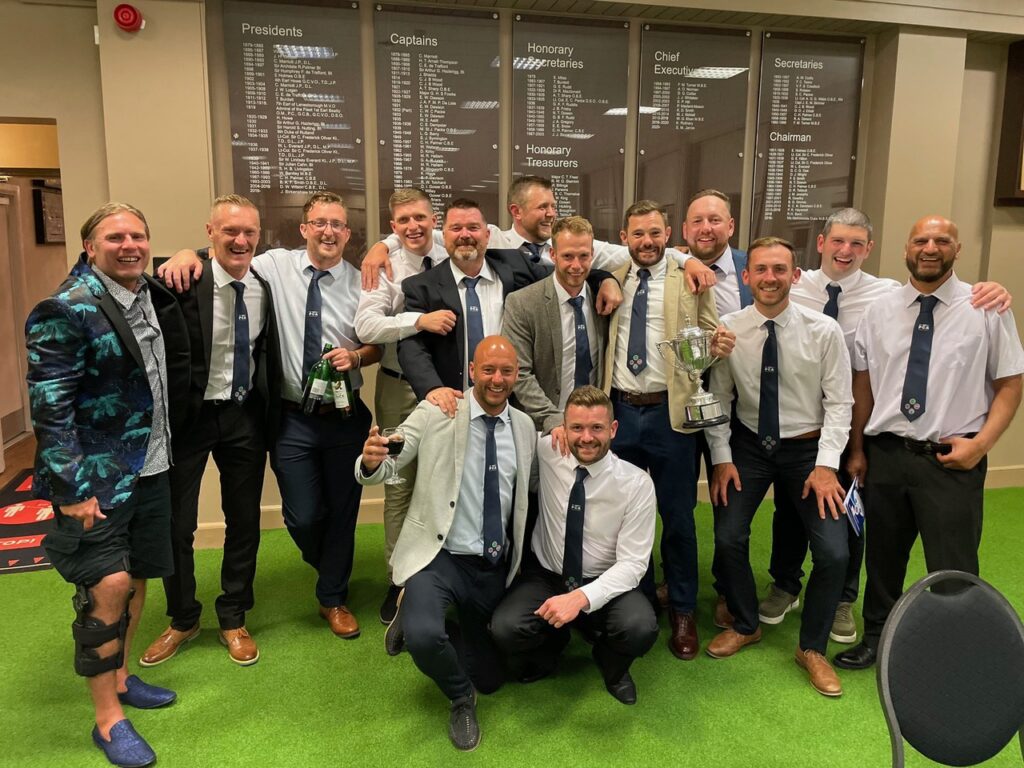